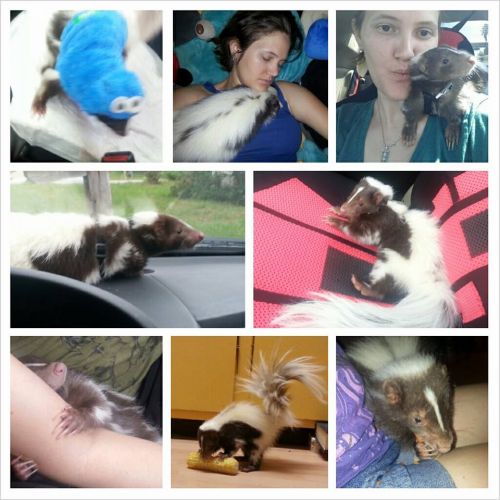 For months she lived with us, constantly in our presence.  Climbing onto chairs, begging for food, taking rides to sidewalk cafes with us, she was a darling, never bit or made angry noises.  She became our joy.

When the time came to get her spayed I thought nothing of it.  Our vet has spayed MANY of our skunks in the past, and many skunks that did not belong to us.  He is skilled and we have never had issues.  However, there is a reason you sign that paperwork. Sometimes, for reasons nobody understands, something goes wrong.   That's what happened.  Even with the best intentions, with many previous skunks and years of experience, something went wrong.  She was only with us for a few months, but she became everything to us in that time.  It broke our hearts when she left.

Our vet is also heartbroken.  He called me tonight to let me know he is in touch with the woman we purchased Doodles from.  He does vet work for her too and is planning to cut her a discount on some future work to cover adoption costs for Doodle's sister.  She won't replace Doodles, but we can give her a good home still, and after having a baby again I can't go back to the silence of a skunk free house.

We will miss you Doodles, but your sister will remind us of you every day.