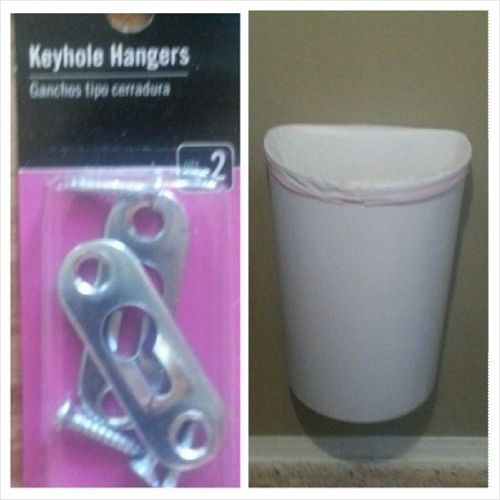 We propped the garbage can on top of things.  We got a lidded can.  We put pieces of cinderblock in the bottom of the can.  Nothing seemed to work. In desperation I turned to skunk forums to ask other skunk owners what they do about this problem.

"I gave up on having an indoor bin."

"I haven't had a garbage can in years"

The responses were not making me feel better. Then one person posted a link to a 1 gallon RV bathroom trashcan that mounts on the wall.  My search began for a fullsized version.  I found them, they are out there, available for ordering online at prices like 165$ for a standard sized plastic wall mount bin. I wilted for a few days, I could never afford to pay that, I would just keep the garbage can on top of the desk.  Three days later, Stunky knocked over the bin again after we left a desk chair too close to the desk, and she renewed my determination.  Wal-mart has D shaped garbage cans for under 20$. They also sell everything else you need.  A few nuts and bolts, some washers, and keyhole hangers.  I drilled four small holes in the back of the garbage can, used flat headed screws with bolts on the outside to keep them from catching the garbage bags when you removed them, and bolted the keyhole hangers to the bin.  Then I hung my garbage can on the wall.

I have not had a problem with them since.

A few notes: I placed two bolts between the garbage can and the keyhole hangers to give myself a little leeway to remove bags.  The keyhole hangers allow for easy removal of the bin should a bag leak or break and the bin requires rinsing out.