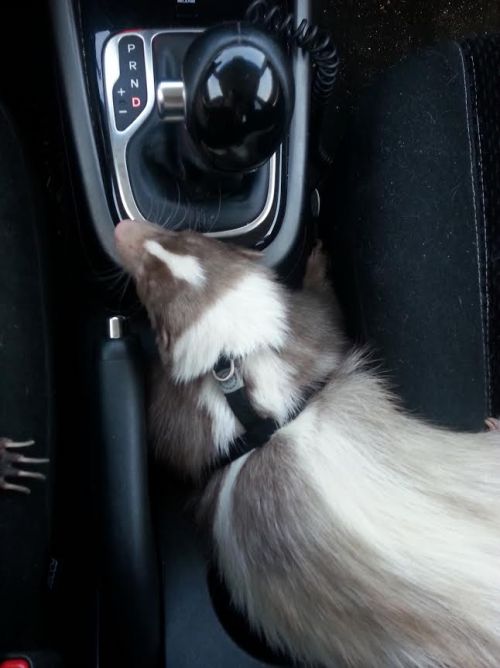 After much testing, we have finally figured out the cause of Gingerbread's prolapsing issues.  Because she was obtained as a rescue it often leaves questions about how she was treated before we adopted her.  One thing I know for sure because I watched them do it as they handed her to me to take home, is that her previous owners had a tendency to pick her up by the tail.  While I freaked and grabbed her, sure that it was not comfortable for her to be held that way, I never realized that it would have such longstanding complications connected to it.  Our vet did an x-ray of Gingerbread's spine, and in all of the views, the vertebrae closest to where the spine and tail meet are touching.

When I say touching, I mean they are sitting on top of each other. The discs must be completely collapsed for it to look as bad as it does, because there is no way to tell where one ends and the other begins.  My vet commented that this was exactly what you would expect to see from an animal who had been hoisted repeatedly by its tail and, surprise, she had.

With disc damage and possible nerve damage there is not much that we can do to combat the cause of her straining/prolapsing on that front. Getting spinal surgery for her would be risky and far out of our price range, not to mention how hard it would be to find an expert in "skunk spines."  So we are taking the other route.

From now on we are going to have to watch her diet and be extremely careful about adding foods which are new or different.  Anything which may cause a bout of diarrhea or constipation is a potential prolapse in the making. So we are going to avoid adding anything new to her diet unless it is during a time in which we know someone will be home to watch the 'results'  (oh the joys of pet ownership.)

Gingy is happily curled up in the cupholders of my car, riding home after her day at the vet, seemingly unaware of the fact that anything has changed. When we get home she'll likely head to sleep in her house per usual.  Nothing has changed in her mind, but for us, a diagnosis (even one that we can't cure) is a great piece of closure.