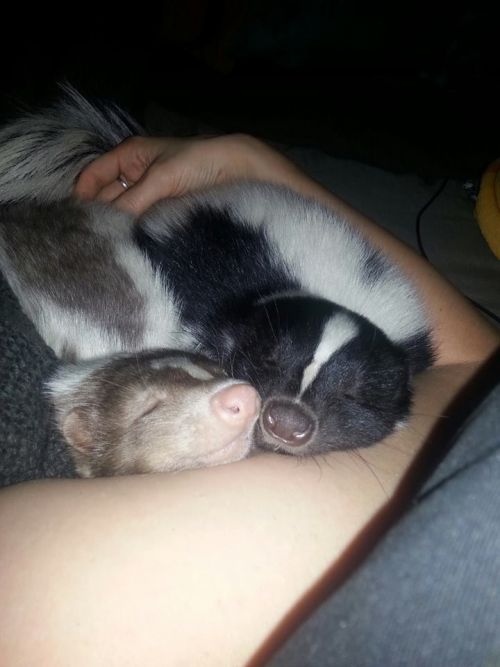 Things to remember when introducing a new skunk to your home:

Your existing skunk has already claimed part (or all) of your household as their territory. This means that they will be most likely to rebel if your new skunk wanders into their selected space.   I try to keep new skunks separate from the pack for a bit when I first start introducing them, and allow the skunks to interact with each other in neutral territory.  This means not the place your existing skunk spends most of his/her time, and not the place you have given your new skunk to help it acclimate. For my skunks that is often either a playpen, or the skunk stroller.  I only allow them to interact while they are under supervision at first.  This is important.  It only takes one instant for an annoyed skunk to injure another skunk.  When introducing them to each other keep an eye on  your skunk's mood.  Don't force them to interact longer than they feel like it.   If your skunks seem agitated, remove them and try again tomorrow.  The chances are they won't become best friends over night.

This is something I do to help the skunks get used to the idea of each other. I will place bedding in each of their houses (a hand towel or a fluffy pet blanket) and after a few days, swap between the two houses.  This gives each skunk a chance to get used to the other skunk's smell being something that they will encounter within their house.  Don't be surprised if the first few times your babies kick the towel right back out of their house.

My skunks have absolutely nothing resembling table manners, and they will shamelessly steal food out of each other's mouths, bowls, etc. The more dominant skunk has a tendency to stand over top of the bowl and stuff her head between her legs to eat the food, leaving the little guy high and dry.... and my girls grew up together.  Don't try forcing your skunks to share a bowl. In fact, I never suggest sharing bowls with skunks, as it makes it harder to tell who is getting what portions and all of the squabbles make a horrible mess of veggies on the floor.  Place their bowls far enough away from each other that they can eat in peace, even once you start giving your new and old skunks more time together unsupervised.  I have had the sweetest skunks turn into evil devils over a piece of hardboiled egg.

4. These are a few of my favourite things

My skunk Gingy has a favourite toy. It's a little stuffed Sven from Frozen and she drags it around the house beating it against things. Woe betide the person or animal who removes her Sven from where she placed it.  She instantly stamps, stomps, squeals, etc.  When introducing a new skunk to the group I try to find all of these favourites, the potential problem causers, and put them away in the skunky toy box during their interaction sessions.

If you are introducing a skunk to a household which already has multiple skunks don't introduce the new skunk to the group as a whole.  I generally introduce them one at a time (in neutral territory) to allow me to gauge if there is one skunk out of the group who is more likely to take exception to the newcomer. Once they are more familiar with each other it is OK to start slowly introducing the newcomer to multiple skunks at once.

When I have a problem with one skunk who just doesn't want to adjust to the newcomer, as a last resort I will try removing the problem skunk to a new area of the house.  Often when taking the skunk out of its normal surrounding you will reduce part of its territorial behaviour.  Unfortunately, this is not an option for animals which have free reign of your entire house.  In extreme cases where months have gone by and your skunks refuse to either get along or ignore each other it may be required that you place each skunk in its own section of the house with a barrier between them or look at re-homing the newcomer.

It may take a few weeks before your skunks are able to be left alone with each other constantly. But time and patience will help you build one big happy family.