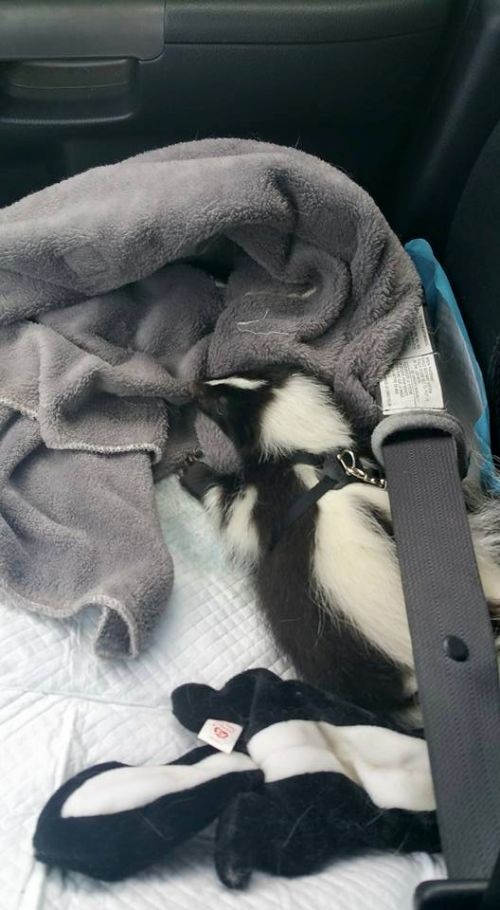 The transfer was facilitated by a licensed petshop so that I would have all the legal paperwork I required. Good thing too, since I almost instantly ended up at the vet.

The picture she sent me the baby looked so angelic. She was sweet when we met. I tethered her to the seat belt on the passenger side as per my usual skunk transport and she took to it like a seal to water.

Then doom! She stood, made a funny noise, and proved she had been hiding the maw of hell in her bum. She spun a circle even, cause nobody dumps a screaming load of hell without spinning in circles. 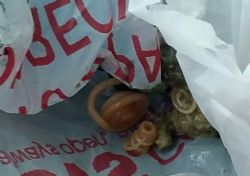 I picked her up to change the potty pad and she crapped a pile of worms on me.  Add insult to injury, she prolapsed while she was at it.   I instantly slowed the car and started looking for a highway exit. Fortunately, by the time I had stopped the prolapse had receded, but the problem was obvious.  I contacted the woman who had adopted the other baby and informed her that she needed to take her baby in to the vet for worming then headed the rest of the way home.  On getting home I placed the worms and stool from the potty pads in the car into a ziplock bag, washed the poop off of the baby, and headed to the vet. 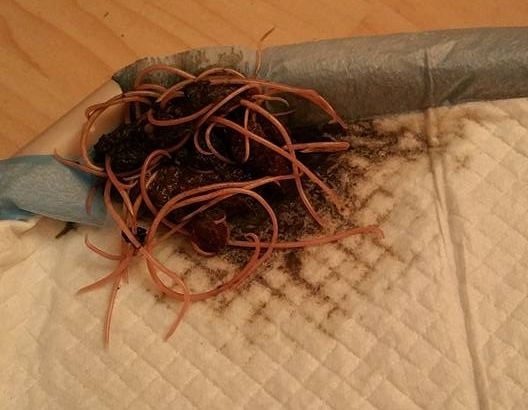 The vet tested the bag of worm stool and informed me that she had not only roundworms (obvious) but also coccidia (not obvious) and so treated her for both. Later that night she passed a giant pile of "spaghetti worms" and prolapsed again.  Being excessively distraught she would not calm down and allow the prolapse to recede again.  This was exacerbated by the fact that her prolapse was leaking worms as the dying worms were passing through her system.  I drove 30 mins to the nearest emergency vet holding the skunk wrapped in a potty pad soaked in warm water and sugar.  This kept her prolapse moist and kept worms from leaking on me until we reached the vet.

The vet gave her a purse stitch after knocking her out and replacing the prolapse (in this case a combination of anti-inflamatories and the isoflurane gas allowed her to relax and the prolapse receded without surgical intervention.) I was given buprenorphine to help deal with the pain and allow her to sleep without chewing on her bum.  I was also given lactulose to give her to keep the stool soft enough to pass through the purse stitch.  When the lactulose was not working well enough I removed it and instead switched her proteins from a solid protein to chicken and apples baby food.  That did the trick.

It's been 4 days now and her coat seems cleaner (yay multiple baths) her eyes are brighter, and she's playful as can be. Welcome home Newt, we love you already.