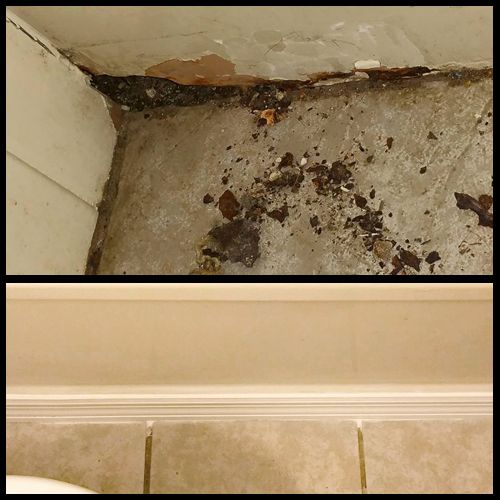 I figured I would share a few of my skunk destruction stories to help those looking to get a skunk understand what they are in for:

The first room in my house that any skunk stays in is the bathroom.  It makes sense.  It's small enough that they can feel secure.  It's tile floors for easy cleanup while teaching them to use the litterbox. However, that means that my bathroom takes a LOT of abuse from skunks.   My most recent skunk, Newt, did a number on the bottom corner of my tub.  I was aware that my grout was slightly cracked, what I was not aware of was that my tub had started rusting.  Newt discovered this and attempted to dig an escape hole through my tub.  You can see in the blog image that she did a fairly good job of removing a lot of rusty metal.  She created a hole about 2 inches by 1.5 inches.  I zoomed so it looks rather large in the picture.   She was not ever able to fit through it.  However, we were left with the fact that we had a rusty hole and a skunk who wouldn't stop digging at it.  I was terrified she was going to cut her paws wide open.   We resolved the issue by buying a piece of outdoor moulding (so it could handle the wet of the bathroom) and placing it along the bottom of the tub with liquid nails.

Two skunks previous, Snickerdoodles took an exception to being left inside the bathroom at night and attempted to rejoin us.  The first night we heard her scratching and thought nothing of it.  In the morning we realized she had been scratching at the bottom of the door and then pulling strips of wood off of the door.  We determined that she had only removed a decorative top layer from a cheap indoor door, but that the underneath layer would be enough to stop her.   Nope.  The next morning she had dug a hole through the second layer as well and you could actually stick your hand into the hollow inside of the door. At the time we were putting wood floors in the living room, so we cut one panel to size and screwed it onto the door as a kick plate.  This stopped Doodles from making it through the final layer of the bathroom door and to freedom. 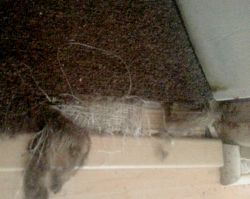 Gingerbread has had her share of naughty nightly attacks as well.  Mostly having to do with the bedroom door.  About 6 weeks after we had finished the wood flooring Gingy got angry that she was not allowed in our bedroom at night.  She started digging at the door. While it was slightly annoying that she woke us up, it was more annoying that in her short time digging she managed to get those claws under the stepdown and remove a chunk of our bedroom berber. This was not the first nor the last incident we have had of skunks digging random areas of carpet up, so we try to keep the skunks only on the wood floor or on the terrazzo.

Doodles was a great skunk for using the bathroom in the litterbox. The only time this did not hold true was when she was able to get into the kitchen.  For some reason (maybe she wanted to claim the land smelling of food as her own) she would always run to the corners and pee when she got into the kitchen.   This caused any number of problems trying to keep her from damaging the hardwood floors.   This problem was originally solved by covering all of the corners in the kitchen with a layer of clear contact paper to keep any sneaky pees from sinking into the wood before they were found and cleaned.  Eventually it was solved by putting up a plexiglass barrier blocking the skunks from entering the kitchen at all.