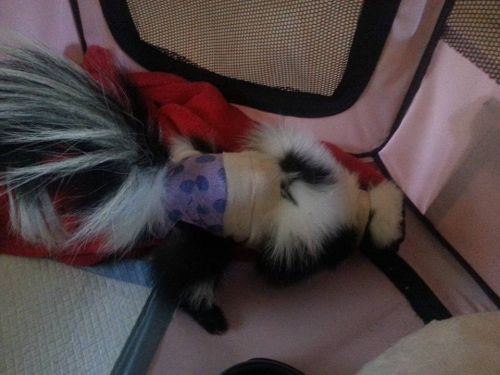 Newtie prolapsed after her surgery.  The vet believes it happened because of all the strain she put on herself trying to bend over and chew on an incision she couldn't reach.  According to him she was performing some amazing acrobatics. With her history of prolapses he threw a quick purse stitch in for a few days in the hopes of keeping it from becoming a recurring issue throughout her convalescence.

After getting home we ignored the fact that she didn't use the restroom for the first day because often the isoflurane that they use to knock them out tends to slow the bowels. I find it common for skunks to not have a bowel movement for up to 24 hours after a surgery. The second day I was watching her when I realized that she was having a bit of an issue.  She was spinning circles in her potty pad tray. It was obvious that she wanted to use the restroom but something was impeding her efforts.  This ended in her dragging her bum around on the floor until I drove her back to the vet. Turns out she had a nice blockage of poo and the purse stitch was doing its job too well.  The vet loosened it and sent me home with lactulose.

The lactulose and the looser stitch worked great!  Too great.   She had a wonderful poo and in her thrilled state she rolled all over it.   Back to the vet for bandage changes.

We went home and she continued to scratch at her bandages, but the incision was safe. The next day she pulled some of the cotton padding from beneath her bandage out in a string.  Because I didn't notice it and snip it off, the cotton bandage turned into a wick and sucked up all the pee the next time she used the restroom. This happened late at night, so we made a trip to the evet to get her bandages changed.   The evet took at look at her and sent her home without a bandage to "give the wound air" and also because the elastiguard tape had given her belly a slight rash.  This meant 24 hour surveillance, which was much easier than it sounded, because I just set myself up on the guest room bed and slept with her.

Most of the time simply consisted of keeping her with me as much as possible so I could stop her from scratching.  It's been two weeks, she's out of diapers, out of cones, out of bandages, no more purse stitch, and she's doing great. Hopefully we are done with vets for good now.