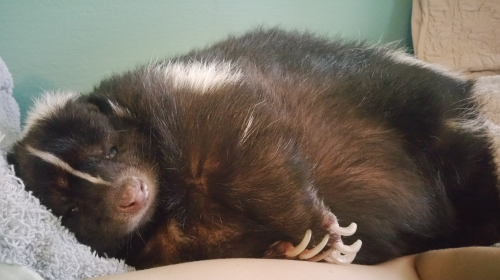 As I have always had a bit of a curiosity about "what would happen to my skunks if I wasn't here" the situation really spoke to my heart. I set up an area away from my girls to allow him time to acclimate to his new surroundings and get used to his new home without feeling the added pressure of being in someone else's territory.  Anyone who knows me knows that skunks generally tend to take precedence compared to many other things in my life. So this took precedence over my dining room and my walls.  I screwed some latches onto my walls, adjusted furniture in the dining room, and added our puppy pen as a removable barrier to create a room for Flower.  Even from the beginning I had a feeling Flower would be sticking around for a bit.

When I got there to pick Flower up a few things were obvious to me.  The first was that this was a man who truly cared for Flower, and that while he was doing what he knew was best for him, it was breaking his heart to do so.  I happily agreed to keep in contact with him and send him updates on Flower.  The second thing that was obvious to me was that Flower was depressed, and that depression was affecting him.  He had gained weight and would need a diet, he was hiding under furniture and didn't want to emerge event for treats, he was a skunk in need of comforting.  The last thing that became obvious to me was that he was stressed.   He stress pooped on me when I lifted him.

ed him into the car and I headed back on the long drive home.  My car was laden with toys, bedding, and food that he was used to.  All things that would help him settle in once he reached my house. Upon reaching my house I spent a bit of time just getting to know him.  I let him out of the carrier onto my bed and gave him scratches, cuddles,  and pets.  I found that he kicks his back leg if you hit just the right spot on his back.  He snuggles into your shoulder if you give him a chance.  He also startles quite frequently and will jump back and away from you with no warning (good thing the bed is against a corner.)  I gave him space when  he wanted it and left him to take a nap on my pillows.  He plopped happily down, smacked his lips in the universal sign of skunkie satisfaction, and passed out.

While he was sleeping I adjusted his area a little.  I put down his toys, I placed the corner litter boxes he is familiar with (and have since been thrilled the he uses them without fail.)  I got the carrier set up under the table with the door removed and placed his sleeping bag/blanket inside for him.   I made a bowl of food.  His owner had been feeding him a ferret diet, so I mixed that with the fruits/veggies/bugs/eggs I normally feed my girls and let him go at it.   He ate all the ferret food the first day and then headed onward to the rest of the food, picking and choosing what he wanted.   He ate every grape tomato, every pea, every dried mealworm, but none of the bell peppers (usually a skunkie fav.) I will start tailoring meals to hold more of the veggies he enjoys and less of the ones he is not interested in, while still offering them in case he decides to try them in the future.   The plan is to wean him off of the ferret food and over to the Mazuri without giving him a sour stomach from diet change.

He ate next to the wooden doghouse I had placed in there for him.  Then proceeded to wander about the room to sniff and learn the different hidey holes.   He took a nap in the doghouse.  He took a nap in the carrier with his old blanket.  He seemed to approve of both and still switches between them depending on how he feels at the moment.  He has a bit of trouble walking for extended times because of his current weight, so we placed them on opposite sides of the room to give him somewhere to retire when he gets sleepy.

Tomorrow I will call my vet and get him in for blood-work.  He has gorgeous white fur and is soft to touch, which is usually a sign of good health in skunks.  I am expecting everything at the vet to point to him being in great health other than his weight.  A diet and some swimming to help him exercise should pull that off of him again.  Which leaves us with the final piece of the puzzle.  Getting Flower to accept us, his new situation, and come out of the depression of losing his favourite human.  We talk to him as we walk past.  Stop and give him pets for a moment, but respect if he pulls away.   I sit on the floor near his carrier and talk at him and he watches me.  Tonight he came out of the carrier and sat next to me.  He left again when I went to scratch his back, but it's already some progress.

One thing I know for sure.  This spoiled baby boy LOVES sleeping on the bed.  That's one way to get him to want to hang out with you.  He will lay against my arm with his head on the pillow.  At night when it is a little colder he likes it if you put the blanket over him and will snuggle down into it.  He will lay there and stare at me, and even though he still starts at shadows, and snorts warning to back off sometimes when I reach to pet him, I think we're reaching an accord.