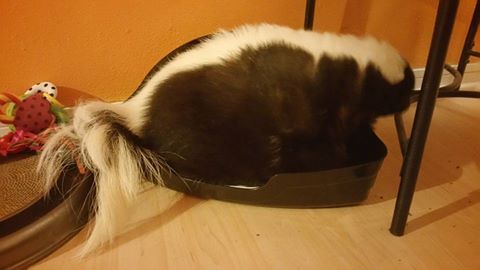 So it has been 20 days since I first picked up Flower and he surprised me with his size. At 24 lbs I was not sure I would be able to manage getting him back to a healthier weight, especially when it became obvious that his size was impeding his ability to walk.

In the 20 days since he moved in we have switched him to a veggie diet fortified with calcium (he needs some strong bones to hold that weight) and Mazuri pellets. We took him to the vet and devised a feeding schedule which gives him smaller meals more often through the day and we started having him swim in the bathtub a few times a week. Even without putting him on the scale we knew he was losing. We can see it in the fact that, while he still drags himself around, he will now stand up and walk small distances.

Those of you who have been following his story also know that his owner had passed and he was suffering from depression. He has now accepted my boyfriend and myself as his new people. We sing songs to him, cuddle in the spare bedroom, attempt to get him to play with toys ( he does when we aren't looking, but not when we are ) and brush him. He LOVES the brush because it scratches itches he can't dream of reaching.

He has slowly gotten used to his new schedule and not only knows when it is food time, he will wander out into the house with his strange dragging gait (and more recently even with real walking with short breaks every few feet) to hunt us down and remind us it is time for a meal and a brushing. He still hates veggies and we have to mix them with scrambled eggs or add a tiny drizzle of olive oil to get him interested, but he eats well and has had no visible issues with the change in diet other than his ornery wish to continue gorging on ferret food.

I love this guy.