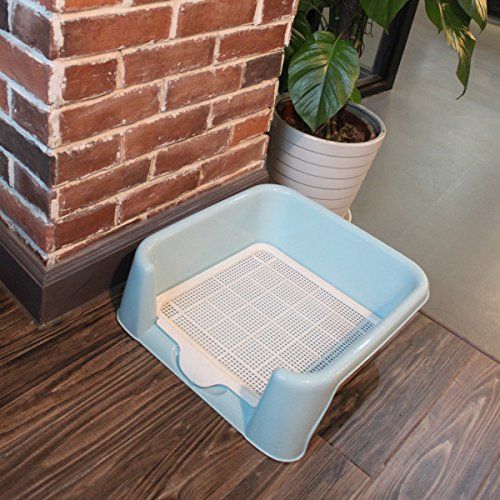 Many years ago while I was in college I lived in a small two bedroom efficiency.  The rooms had no doors, the kitchen was a tiny corner of the living room, and the couch took up most of the extra space.  My friends and I would hang out on the couch watching TV or playing video games. I had purchased my first skunk, and at the time there was not the dearth of online knowledge about them that there is now. I was learning on my own and with the help of my one friend who had a pet skunk. One of the first things I had to tackle was potty training. Thankfully, I lived in a house that was fully tiled floors, so I was able to make a few mistakes (and so was the skunk) while working on this.

After a few weeks of potty training I was pleased to noticed that my skunk was mostly using the bathroom in the litterbox I had placed.  At least I had stopped finding poop in random corners.  (Skunks are naturally drawn to corners and back into them to poop) A week or so after I was patting myself on the back saying "that wasn't so hard" my friends started remarking that my house has a specific "eau de toilette" going on about it.  We started searching for the source, my friends, champs the lot of them, helping me sniff different rooms.  While we had found that it was coming from somewhere in the livingroom/kitchen area, we found no source, and so I determined that I might just have to clean my litterbox twice a day instead of once.  A few days later and my friends are informing me that the smell is worse, not better.  We search all around again.  Nothing.

This went on long enough that I legitimately started thinking my friends were messing with me.  I had moved furniture, checked places the skunk could never reach, adjusted everything, and still found nothing. Sitting on the couch and pondering the problem with a friend of mine we noticed the skunk sneak out from underneath it right between our legs.   Once again we pulled the couch from the wall and saw nothing.  On a whim we tilted the entire couch.  My sweet bundle of joy, who I thought learned to use the bathroom so well, had stolen shirts and socks and made a nest inside the lining of my couch.  Comfortable enough in there not to want to leave, she designated one corner of the inside of my couch as "bathroom" and had FILLED it with poop.  We tore the entire lining off of the couch bottom and scrubbed it clean.  Then, to avoid similar issues, we removed the legs from the couch and placed it straight on the ground.  There was no way for PhiPhi to go under the couch anymore.

This made my skunk angry enough that she pooped EVERYWHERE again.  She stopped using the restroom at all and pooped in corners, in the middle of the floor, and even once, in my shoe.  An angry skunk, even a well trained one, will poop anywhere to get their point across.  My house was a minefield.  I had to confine my skunk to the bathroom (the only room in the house with a door) and start potty training her from scratch.  Finally the training stuck and she became her normal self again.  I, however, have never forgotten the lesson that phiphi started and other skunks have continued: Potty training a skunk is not as simple as you think.

Some lessons I have learned though the years about potty training:

Wrapping up my crappy (haha) story, skunks CAN be potty trained, but it takes a lot of work and sometimes re-training to get them to use the restroom as expected. They are closer to a puppy than a kitten in this regard and will not automatically poop in the box  you gave them.  Some skunks are cleaner and easier than others, but if you live in a house of pristine white carpets, a skunk will need work before you can set them loose without supervision. If you are looking for an animal who never misses the litterbox, a skunk is probably not for you.