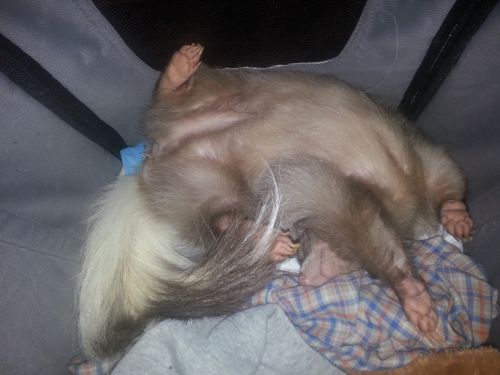 We lost a wonderful skunk last week. Gingerbread came to us from a small rabbit cage in the back of a petshop stacked next to the dog food. I remember seeing her there, sending Ken a picture, and he instantly said "How much? We can't leave her like that."  We brought her home and gave her room, friends, and love.

She may have been crotchety, hand shy, and sometimes a bully to the other skunks... but she was amazing when she wanted to be.   She would cuddle, she would play, she had a good life.  She also had recurring prolapses which we dealt with as they happened.   I always assumed that we would lose her to a prolapse that happened when we were not home.   But that was not the case.   Last week she got sluggish, stopped eating (and anyone with a skunk knows that is a warning sign) and refused to use the litterbox.

We tried everything to get her to eat and finally managed to get her to eat a few pieces of dog food.  Off to the vet we went, and they started doing tests and scans.  What came back was nothing we expected.  She had cancer.  Tumors were plugging one of her kidneys and stopping it from draining.  The vet did an ultrasound to get a better look at both the kidneys and the growths.  We didn't get good news back.  The second kidney was not doing enough work to remove the messed up one, she was going into renal failure.  If they did surgery to remove the tumors and kidney, at the point she was at, it would probably kill her.

We decided to let her go peacefully.  We made an appointment with our regular vet, took her home, and let her spend her last night with the other skunks.  We spoiled her with tasty treats (most of which she wasn't up to eating) and spent the night cuddling her in bed telling her what an amazing skunk she was.  The next morning we went to the vet.