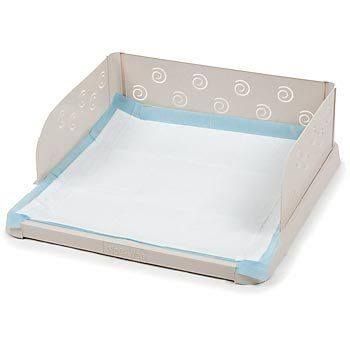 I made the switch to potty pads years ago and everyone in my house was happier for it.   I purchased a puppy potty pad holder which had walls since skunks are used to backing into a corner to pee. This allowed me to protect my walls, and kept them from backing so far up that they missed the edge of the pad.

We also tried several different types of potty pad holders.  Some skunks will use one like the one pictured, and it works great.  Others will steal the potty pad for bedding.  Those klepto skunks may require one of the holders that places a grate between the animal and the potty pad.  It takes a little longer to clean, but it can be very much worth it.   Because my skunks are in two different areas, we have some of both types.

Some tricks to potty training that I have found:

I see some people talk about positive reinforcement, but I don't use it because I have had issues with manipulative skunks who use it purposely to get treats.  One such event:

My Skunk's litterbox was near the kitchen cause I lived in a studio apt at the time. I was cooking breakfast and she could smell the bacon and eggs. The evil beggar that she was she tried to get me to cave and feed her delicious fatty pork and cheesy eggs. I refused.

"How clever! You peed again! Here's another little piece of egg!" I was so proud of myself, look at my training working so well.

She pees in the litterbox a little more. "uhhh... either you have a UTI or you're playing me. I'm pretty sure you didn't even actually pee that time. You're not getting anymore of my breakfast" I tell her.

She stomps her feet. She has used the litterbox and demands tribute. However, I stand firm and refuse to budge.

In an act of pure defiance at the fact that I refused to reward her bathroom habits, she crapped in the middle of my kitchen floor then wandered off grumbling.

After that I changed my potty training from positive reinforcement. Cause that was not working