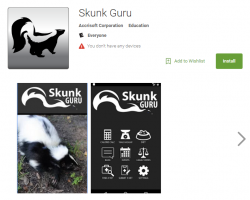 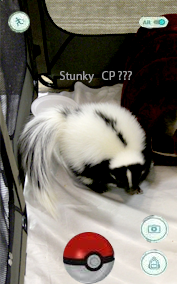 When this time of year comes around all of my skunk owning friends start posting pictures as their skunks have babies, as they bring home their new acquisitions, as they rescue wild litters and work towards releasing them, etc.  It's a time where I have to clamp firmly onto my wallet and my tendency to impulse buy and just keep saying "No no no no no."  It's a hard word to say when faced with a million skunky babies.  They're cuter than should be legal.

It's happened. I finally gave in.  We're having a super bowl party.  Well, sort of.   Deborah from Skunk Haven has finally been allowed to announce that her skunk, Tank, will be playing the part of "Stanley the referee" in this year's Animal Planet Puppy Bowl. So I called Verizon, got my channel package updated to include Animal Planet (how did I not have that already) and we're ready to go.  We'll be cheering for you, Tank.

Having lived past the time in my life where I enjoy the morning clean up of having tons of people over to my house downing alcohol like fish, I had a much lazier new years eve than I used to.  Ken and I spent the evening together watching the ball drop on TV and playing Hearthstone arenas online.   I spent a fair bit of that time with Newt lying in my lap snuggling me.   She sleeps like a log when she's comfortable and has taken to having long naps with me while I watch TV after work. Gingy popped out for a bit to say hello and Stunky spent the evening hidden in the bathroom cabinet since it's now cleaned out. Newt is really the only skunk who deigns to spend excessive hours of her time with me (probably because she spent so much time spurned by the other skunks.