Skunks in the News 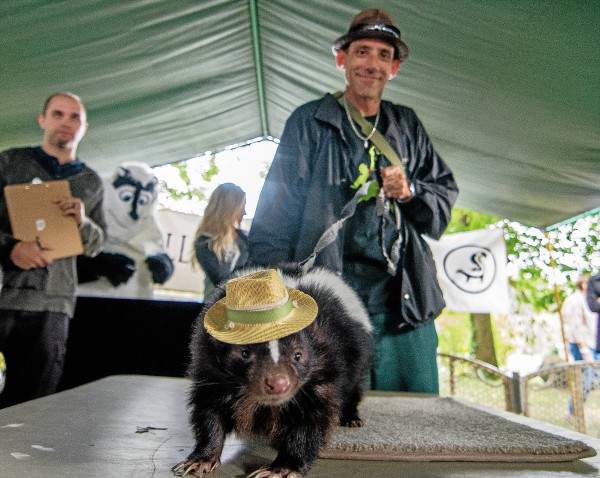 An army of skunks and their human handlers descended on North Ridgeville’s South Central Park for the 14th annual Skunk Fest on Sept. 12.

Since its inception 14 years ago, Skunk Fest has grown a little bit larger every year, bringing  thousands people who  travel from all over the country to attend the one day event, founder Deborah Cipriani said.

“The first Skunk Festival was held in my front yard with only about 20 people. Around 2009 we moved it here to the park. People travel from all over – if they love skunks they come here,” Cipriani said. 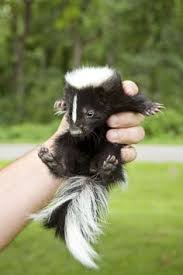 It is illegal to keep a skunk in New Jersey unless it is acquired from a licensed dealer, and Averso is the only dealer in the state authorized to sell them, said Susan Predl, chief biologist at the Division of Fish and Wildlife. As such, he can issue a temporary permit to skunk buyers, who must then pay $12 a year for a captive-game permit.

NJ Exotic Pets works closely with veterinari-an Christopher Stancel of the Dog, Cat & Bird Clinic of Nutley, an exotic-pets specialist, who de-scents and neuters the baby skunks before they are sold, Averso said. 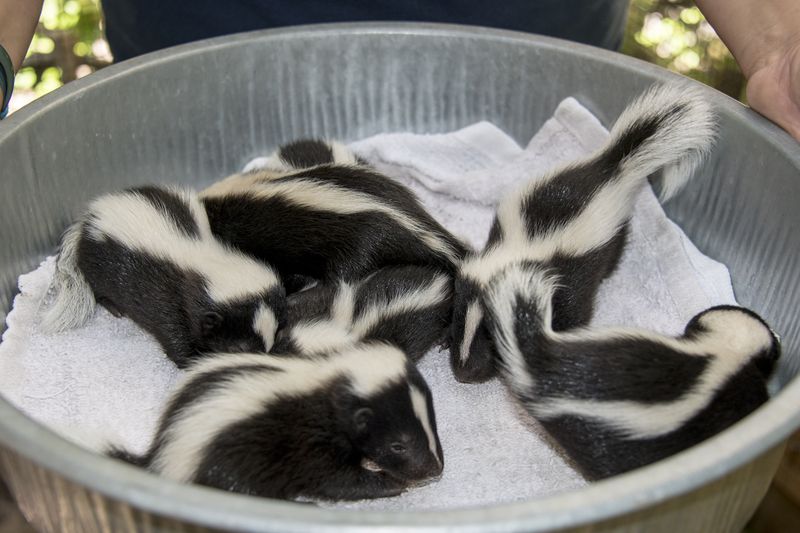 Tampa’s Lowry Park Zoo has welcomed a litter of seven baby Skunks!  Born May 2 to first time mom, ‘Mia’ (now affectionately known as ‘Momma Mia’), the Skunk kits have just opened their eyes and will soon emerge from the den. Mia and kits, five boys and two girls, have been relocated to a temporary enclosure, along the Florida boardwalk, until the kits are mobile.

who even takes it for walks on a lead 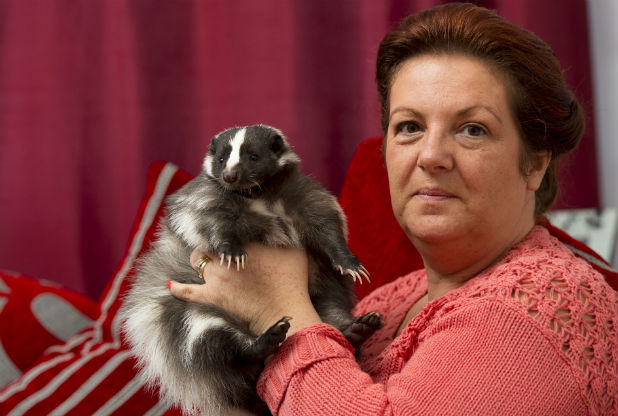 ANIMAL-LOVER Nicki Clarke is kicking up a stink for her New Year resolution - by convincing people to love her pet SKUNK.

Nicki, 51, shocked her neighbours by sharing her home with her black and white pet skunk Lola.

Skunks as pets? You bet. Wake up and smell the coffee.

Shortly after Orlando magazine’s pet issue was published in September, Answer Man received an email from Brenda Hoch of Florida Skunk Rescue asking if we would consider doing a story on skunks as pets. She also mentioned an upcoming October skunk show in Kissimmee.

Revelations indeed. Answer Man’s exposure to skunks up to now has been limited to childhood—watching cartoon character Pepé Le Pew’s misguided amorous advances toward a cat. 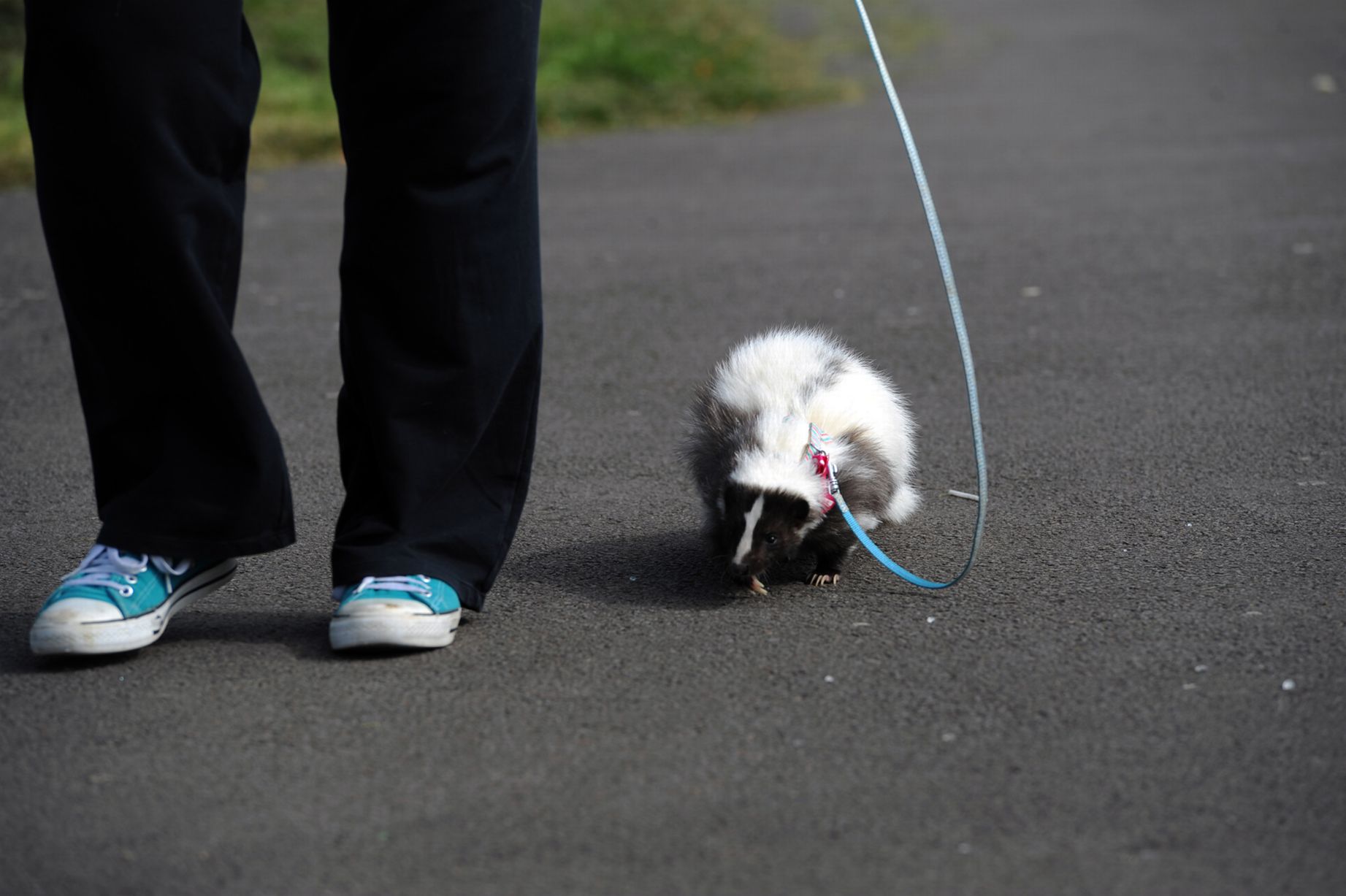 It's not every day you see a woman walking a skunk to work.

But that’s exactly what you’ll see Nicki Clarke doing as she walks her pet skunk Lola on a lead from her home to a reptile shop on Cowbridge Road in Cardiff.

Walking Lola isn’t exactly like walking a dog. Nicki says Lola tends to go wherever she likes but has settled in well to the Clarke household and doesn’t smell as much as you might think.

And, according to her owner, she hasn’t sprayed once yet. 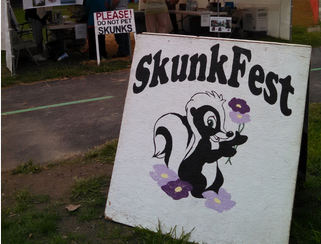 The 13th annual celebration of skunks was held on September 13th, 2014, at South Central Park in North Ridgeville, Ohio - the same place it was held last year. It was raining in the morning but thankfully it stopped shortly after the festival began. It was a cool, cloudy day but plenty of skunk lovers from around the world still showed up!

The One Skunk Health Issue You Cant Ignore

Obesity, heart disease, dental problems and other ailments can be minimized or avoided if you pay attention to your skunks nutrition. 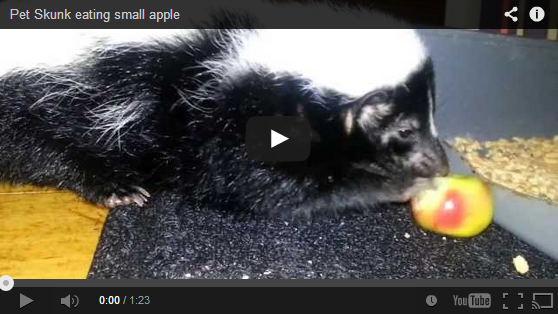 Skunks are intelligent and curious animals, but they are not a pet for everyone. They get into just about everything, they are high maintenance and they require a lot of time and attention from their owners. For a person with plenty of time, a pet skunk may make a good pet.

Pet skunks are prone to some medical problems related to an inappropriate diet and some viral diseases that can be fatal. The exact nutritional requirements for skunks are unknown, and very little research has been done on the nutritional needs of skunks.

In the wild, skunks eat just about anything. They are considered opportunistic omnivores. Their diet includes insects such as beetles, grasshoppers, crickets, moths, grubs, caterpillars, bees and wasps. They also eat worms, snails, clams, crayfish, fish, frogs, snakes, mice, rats and squirrels. They also eat fruits, grains, nuts, vegetables, bird’s eggs, carrion, and garbage. In the wild, skunks have to forage for a long time to find food. This foraging burns up a lot of calories.